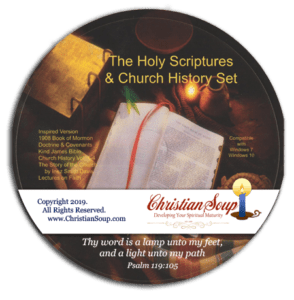 Restoration scriptures and materials that are found on this program are easily available to cut and paste to documents. Students will find two bibles: Inspired and King James versions and Church History volumes 1 to 4, the classic book “The Story of the Church” (RLDS) by Inez Smith Davis, 1908 Book of Mormon, Doctrine and Covenants, and Lectures on Faith. A “must” have for quickly referencing information for sermons, documents and articles that will allow readers convenient access to these important materials.

Webster’s 1828 Dictionary could easily be considered one of the most important biblical reference books available. It is not surprising, therefore, that it contains the greatest number of Biblical definitions given in any reference volume.

The Noah Webster 1828 Dictionary was the first American Dictionary of the English Language and for many years was the standard of the English language in the U. S. A.   Noah Webster was a founding father, a prolific writer and scholar. The 1828 dictionary is used today by many pastors, seminary students, religious writers and home school families as they study the writings of the founding fathers, the original documents of our country along with the bible and many other historic biblical references.

Noah Webster and the majority of the founders were Christians. He used the Bible to define many words in his dictionary, and utilized examples in scripture. The dictionary allows you to see how language has changed and what the original intent was of each word, including the scriptural meanings.

Easily cut and paste to your word documents. 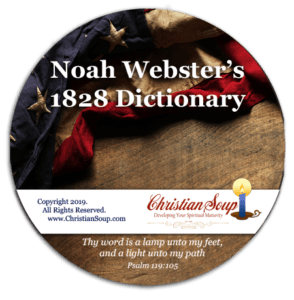